By James A. Tuck
Fall 1991
[Originally published in printed form]

The 'Maritime Archaic tradition' is a Native Indian culture that flourished throughout Atlantic Canada between about 7500, and 3500 or 3000 years ago. It was first named after the excavation of a cemetery at Port au Choix, on the west coast of Newfoundland's Northern Peninsula, [which] revealed an unexpected wealth of tools, weapons and other objects pertaining to the first people to occupy the province. The name comes from the 'Archaic' period, a time during which hunting and gathering wild foods constituted the sole means of survival, and from the obvious fact that the Archaic inhabitants of Newfoundland and Labrador depended heavily on marine, or maritime, resources. 'Tradition' implies that this distinctive way of life persisted for some time, in this province for more than 4000 years. 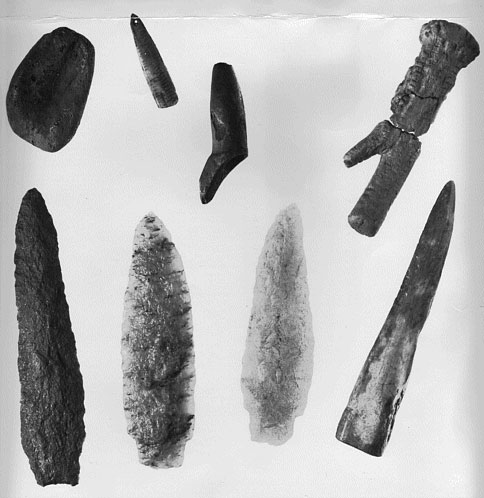 The first people in the province arrived in southern Labrador, probably from the Maritimes and north shore of the St. Lawrence, about 9000 years ago. The earliest evidence for fully maritime adapted people comes from L'Anse-Amour, also in southern Labrador, where the burial of a child about twelve years of age beneath a low rock mound about twelve metres in diameter represents the oldest burial mound in the New World. With the skeleton were a number of objects indicating that marine resources were being exploited by at least 7000 years ago. A 'toggling' harpoon, a sophisticated seal hunting device that twists, or toggles, in the wounded animal and prevents it from escaping is the oldest such device presently known. An antler handle may have been attached to the hand-held end of the line opposite the weapon tip. A walrus tusk and the bones of fish also indicate that the sea's resources were important to the ancient people of southern Labrador.

The descendants of the first inhabitants of southern Labrador continued to expand northward, eventually reaching northernmost Labrador, probably more than 5000 years ago. Only a few years later the first Maritime Archaic people crossed the Strait of Belle Isle to Newfoundland, and by about 4000 years ago, virtually the entire coastline of Newfoundland and Labrador was occupied by Maritime Archaic hunters.

Throughout their existence the Maritime Archaic people continued to rely on the resources of the sea for their subsistence. Harpoons, lances, fish spears and bird darts from Port au Choix and elsewhere attest to the sophistication of their hunting practices. Caribou and other land mammals and birds were also important at some seasons. In far northern Labrador, complex 'drive lanes' composed of strategically placed piles of rocks channelled migrating caribou to within a stone's throw of the village sites. A similar system was employed in historic times by the Beothuks to channel caribou to river crossings where the swimming animals were easily killed by hunters in bark canoes. Since most food resources of Newfoundland and Labrador - harp seals and other sea mammals, caribou, migratory birds, salmon and capelin, for example - are seasonally abundant in certain locations, Maritime Archaic people situated their settlements in places from which these various species could be exploited. Most appear to have been on the coast, where most of the resources were available. Land mammals may have been hunted within a few kilometres of the coast making seasonal movements to the deep interior unnecessary. A great deal, however, remains to be learned about Maritime Archaic subsistence practices and, given the wide range of environments from northern Labrador to Newfoundland's south coast, local variation probably makes any general statements unreliable. 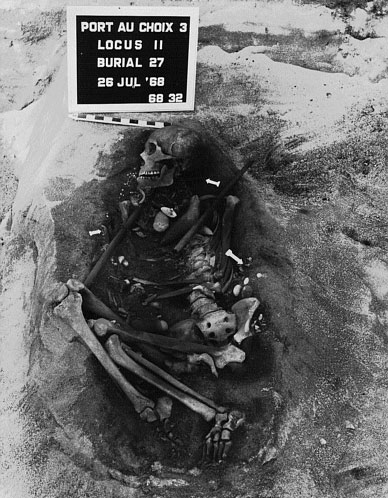 The types of dwellings used by Maritime Archaic people also seem to have varied from one area to another. In Labrador, and especially on the central and north coasts, a series of house types begins more than 6000 years ago with single round 'pit-houses' excavated into boulder beaches. In time these become elongated multi-family dwellings with individual living quarters separated by stone cross walls. Near the end of the Maritime Archaic period in northern Labrador, between about 4000 and 3500 years ago, this house type culminates in 'longhouses', or at least rows of adjacent dwellings, each with its own fireplace, reaching as many as 100m in length. Although the earliest part of this sequence may be present in southern Labrador, no trace of the later developments is found there, nor on the Island of Newfoundland. In fact, except for simple stone hearths, archaeologists have no indication as to what Maritime Archaic houses in Newfoundland looked like. We suppose, however, that they were simple structures framed with small poles and covered with bark or skins.

Thanks to the excellent preservation of bone, antler and ivory in the cemetery at Port au Choix, we know a great deal about some of the tools, weapons, ornaments and other objects made and used by Newfoundland's first people. Even objects made from these materials represent only a fraction of the total number of objects in everyday use; we can only imagine what things were made from wood, bark, skin and other materials that have not been preserved.

In addition to the hunting weapons mentioned above, there were many tools used for processing a variety of raw materials. Several types of scrapers made from caribou bone were used to remove hair and fat from skins. The cleaned, and tanned, hides were fashioned into warm garments sewn with needles made from split bone, some having eyes as fine as 0.5mm. These garments must have included leggings, shirts and jackets, boots, mitts and some sort of head covering. Traces of one such garment, defined by several rows of small shell beads, suggest a hooded garment not unlike a parka. Many individuals had apparently been buried wearing clothing decorated with finely carved ornaments in the form of birds or animals and other forms not recognizable to us.

Although none of its products have been preserved, tools for working wood indicate a well-developed woodworking industry among the Maritime Archaic people. Stone axes were used for felling trees and rough shaping of large objects; adzes, usually of stone but occasionally made from walrus ivory, and stone gouges may have been used for shaping and hollowing large objects, perhaps including the large dugout boats that some archaeologists suspect were the Maritime Archaic people's principal means of transportation. Judging from the preserved carvings in bone and antler, carving of wooden objects was also an important occupation. Beaver teeth, ground into a variety of fine cutting edges and hafted in antler handles, were used to manufacture many fine carvings that have long since disappeared.

Stone was shaped by flaking to make spear and knife blades or by grinding to form the finely finished spears and lances mentioned above. At Bloody Bay Cove, Bonavista Bay, a vast quarry site marked by a deposit of unfinished artifacts and discarded flakes covering several hectares, attests to the importance of stone tools and weapons to the Maritime Archaic people.

Discoveries at Port au Choix and elsewhere indicate that the intellectual culture of the Maritime Archaic people was no less well developed than their technology. Many of the objects used to decorate their clothing had a much deeper significance than mere ornaments and may have been worn to ensure success in hunting, to acquire desirable personal qualities and to control those parts of human existence over which even the most sophisticated technology is powerless. One especially powerful such symbol is an expertly carved stone killer whale, clearly identified by its prominent dorsal fin. The group possessing such an object may somehow have acquired the killer whale's prowess as a seal hunter (a very important pursuit for Maritime Archaic people) and, at the same time, protected hunters against attack by killer whales.

Finally, the care lavished upon the burials of all individuals, from newborn infants to old adults, reveals sensitivities very much like our own. The rituals performed at the graveside would be unfamiliar to us, but the feelings and emotions of the participants were remarkable similar to our own. 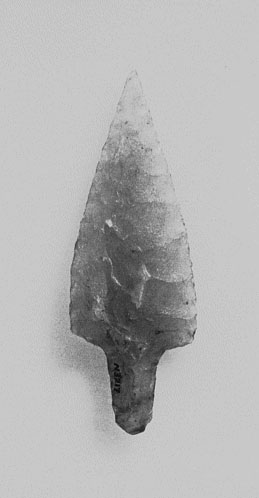 The history of the Maritime Archaic people in Newfoundland and Labrador is only beginning to be understood. From earliest times until about 4000 years ago they were the sole human occupants of the province, free to travel and to settle wherever social and environmental conditions led them. For several thousand years Maritime Archaic people probably never saw another human being who did not speak their language, whose customs they did not share and, indeed, to whom they were not related by descent or marriage.

About 4000 years ago a new people, known to archaeologists as 'palaeoeskimos' (palaeo=old) arrived in northern Labrador. They were physically unlike the Maritime Archaic people, spoke a very different language, had a different history and probably shared none of the Maritime Archaic peoples' culture and traditions. What the reactions of these two peoples were when they first sighted human beings so different from themselves, and whose existence they had never suspected, we can only imagine.

About the only thing the two peoples had in common was a desire to exploit the same resources along what is now the coast of Labrador. We cannot say what relations between the two groups were like, but it does seem clear that the palaeoeskimos continued their southern expansion, and that they did so at the expense of their Maritime Archaic predecessors. By about 3500 years ago all trace of the distinctive Maritime Archaic culture disappears from the north and central Labrador coasts; their campsites are replaced by those of the palaeoeskimo, the latter often situated in exactly the same places as the former. We do not know what happened to the northern Maritime Archaic people themselves. They may have been assimilated by peoples to the south, but very few of their distinctive tools and weapons are found there; present evidence suggests that they may have become extinct.

An equally puzzling situation exists on the Island of Newfoundland where archaeologists have not been able to find any trace of Indian peoples following the last known Maritime Archaic burials made not long before 3000 years ago. For the following thousand years Indian cultures remain invisible. This may be, in part, a result of bad luck on the part of archaeologists looking for their remains, but it must also indicate that, at the very least, Indian population numbers were vastly decreased. Again, it may be no coincidence that palaeoeskimos occupied many sites in Newfoundland during most of this puzzling millennium.

Along the north shore of the Strait of Belle Isle, however, a different situation seems to have obtained. Archaeologists have found many small campsites indicating that the descendants of the Maritime Archaic people continued to live there until after 2000 years ago and there is some evidence to suggest that they continued to do so until European explorers, fishermen and whalers arrived in the 1500s.

Some of the first Native People to be encountered by Europeans, then, may well have been able to trace their history of occupancy in Newfoundland and Labrador more than 8000 years into the past. Today we do not know what these first people called themselves or, for that matter, even what language they spoke. What we do know, however, is that the were the first human beings to occupy what is now Newfoundland and Labrador and that they were remarkably successful in doing so. In fact, despite changes in the natural and social environments, some of the descendants of these first people may have persisted for thousands of years, into the historic period.