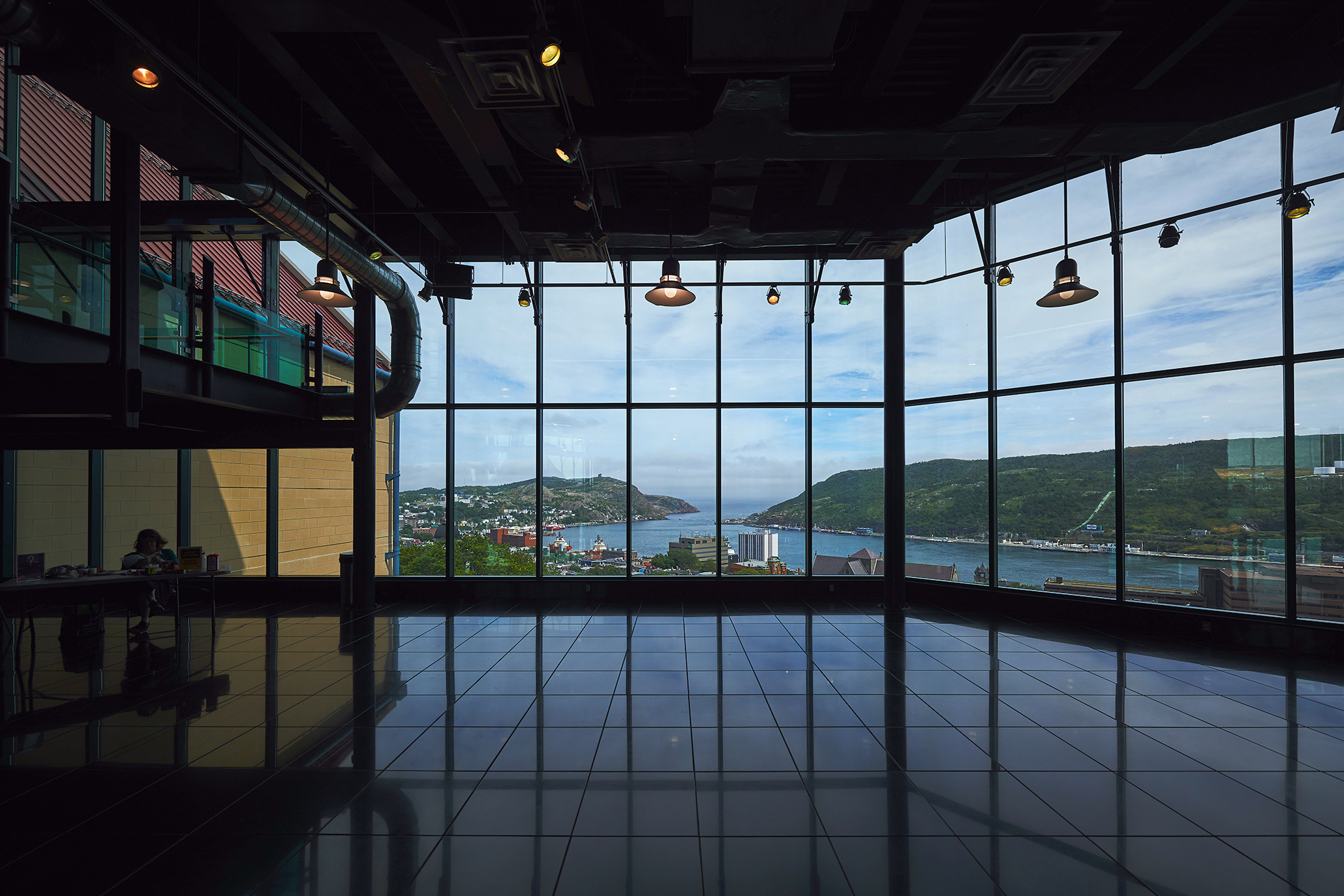 The Rooms is happy to engage with media locally, nationally and internationally on our campaigns, exhibitions, and the art, archives, artifacts and activities that find a home in our important cultural centre.

Fast Facts about The Rooms

2. The Rooms brought together the Provincial Archives, Art Gallery and Museum to create a single, dynamic and multidisciplinary cultural institution.

3. In its first decade, almost 800,000 thousand people visited The Rooms. That number is now close to one million.

Visit About Us for more.

Interim CEO Appointed at The Rooms

Anne Chafe has been appointed as the interim Chief Executive Officer (CEO) of The Rooms Corporation of Newfoundland and Labrador effective immediately. Ms. Chafe replaces Dean Brinton who had served in the role since 2005. Ms. Chafe has been with The Rooms since 2007 and most recently served as the Executive Director of Museums and Galleries. More.

The Rooms has completed a multi-year project to digitize all First World War military service files and personnel records of the Royal Newfoundland Regiment and the Newfoundland Forestry Corps. In 2015 The Rooms launched the project as part of the commemoration of Newfoundland and Labrador’s role in the First World War. The project to digitize all the service files is now complete – ensuring that all individuals who served are preserved and represented. More.

Commemoration of the 100th Anniversary of the Action and Bravery at Drie Masten, Belgium

The Honourable Seamus O’ Regan, Minister of Veterans Affairs; Betty Parsley, MHA for Harbour Main; Earl Ludlow, Vice-Chair, Board of Directors of The Rooms Corporation; and Ronald Penney, Royal Newfoundland Regiment Advisory Committee, will address the public and invited guests on Sunday, October 14, at 1:15 pm at The Rooms as part of the commemoration ceremony of the 100th anniversary of the attack at Drie Masten. More.

The Rooms contributes $15,000 to Military Family Resource Centres in Newfoundland and Labrador

The Board of Directors and staff of The Rooms Corporation are very pleased to contribute part of the proceeds from the sale of pewter forget-me-nots in support of military families in our province. More.

In observation of National Indigenous Peoples Day, and to celebrate the heritage and diverse cultures of the Indigenous peoples of our province, The Rooms, in partnership with Eastern Edge Gallery, has created a new opportunity for Newfoundland and Labrador Indigenous artists. More.

The Rooms Corporation launched a companion catalogue Monday for the exhibition Beaumont-Hamel and the Trail of the Caribou: Newfoundlanders and Labradorians at War and at Home 1914-1949. Sylvain Vinet, Region Head, Eastern Canada Region, CIBC, joined Dean Brinton, CEO The Rooms Corporation to make the announcement. More.

The Rooms Receives Award of Outstanding Achievement in Education

The Canadian Museums Association honoured The Rooms with the Award of Outstanding Achievement in Education for the exhibition catalogue SakKijâjuk: Art and Craft from Nunatsiavut at an event last night in Vancouver. More.

Provincial Government Announces Appointments to The Rooms Corporation Board of Directors

The Honourable Christopher Mitchelmore, Minister of Tourism, Culture, Industry and Innovation, today announced appointments and re-appointments to the Board of Directors of The Rooms Corporation. More.

Canada Council for the Arts Increases Funding to The Rooms

CEO of The Rooms Recognized with Nation's Top Civic Decoration

Dean Brinton, CEO of The Rooms Corporation, was presented with the Meritorious Service Medal in the Civil Division by Her Excellency the Right Honourable Julie Payette, Governor General of Canada, today at Rideau Hall in Ottawa. More.

The Rooms Selected as Finalist for Governor General’s History Award

Her Excellency the Right Honourable Julie Payette, Governor General of Canada, has selected the exhibition Beaumont-Hamel and the Trail of the Caribou: Newfoundlanders and Labradorians at War and at Home 1914-1949 as one of three finalists for this year’s Excellence in Museums: The History Alive! Award. More.

Vimy Flight, a team of volunteer pilots and ground support is making the final stop of its cross-Canada tour in St. John’s on Friday, November 10, at The Rooms, beginning at 1:00 p.m. More.

The Rooms Corporation is pleased to announce that Anne Chafe, Director of the Museum Division of The Rooms, will be adding administrative leadership of the Art Gallery Division to her current duties. More.

The Rooms continues its First World War commemorative efforts with the launch of a bilingual online exhibition entitled Beaumont-Hamel and the Trail of the Caribou: Newfoundland and Labradorians at War and at Home 1914-1949. It features new stories, a 3D virtual tour of the physical exhibition and a special section dedicated to the battle at Beaumont Hamel. More.

RBC contributes $250,000 to the Where Once They Stood We Stand Capital Campaign for First World War Commemoration at The Rooms

Colin Krulicki, Regional Vice-President, RBC, and Gary Corcoran, Vice-President and Branch Manager, RBC, presented Tom Foran, Chair and Dean Brinton, CEO of The Rooms Corporation, with a cheque for $250,000 towards the Where Once They Stood We Stand Capital Campaign. More.

Where Once They Stood We Stand Capital Campaign Reaches $11.1 Million

This afternoon, the Honourable Brian Tobin, PC, OC, former Premier of Newfoundland and Labrador and Vice-Chair, BMO Capital Markets, and Victor Pellegrino, Senior Vice-President, Atlantic Provinces Division, BMO Bank of Montreal, presented a major donation of $1,000,000 towards The Rooms Where Once They Stood We Stand Capital Campaign for First World War Commemoration. More.

On Thursday morning, The Rooms launched the Remember Them at The Rooms public campaign to commemorate the 100th anniversary of Beaumont-Hamel and Newfoundland and Labrador's involvement in the First World War. General Rick Hillier and Tom Foran, co-chairs of The Rooms First World War Capital Campaign, and Dean Brinton, CEO of The Rooms Corporation, Newfoundland and Labrador, unveiled the Where Once They Stood We Stand donor acknowledgement wall, recognizing the major contributors to the capital campaign to date. More.

On June 29, 2005, Newfoundland and Labrador opened the doors to a new era of celebrating our culture and preserving our heritage. In the decade since The Rooms opened, the people of Newfoundland and Labrador have come to recognize it as an emblem of their passion and pride of place. Visitors have included thousands of school children from across the province, tourists from around the world, British royalty, the Governor General, premiers from every region of Canada, international dignitaries and ambassadors, and of course our nearby friends and neighbours. More.

Today, Barry Perry, President and CEO of Fortis Inc. presented a cheque for $3.25 million to General Rick Hillier and Tom Foran, Co-Chairs of the Where Once They Stood We Stand Capital Campaign, to support the commemoration of our province’s contributions to the First World War. The contribution from Fortis is the largest known corporate donation ever made to a cultural institution in Atlantic Canada. More

The Rooms announced today that local philanthropist, Elinor Gill Ratcliffe, has given an additional $1 million to The Rooms towards the Where Once They Stood We Stand Capital Campaign for the First World War commemoration. Ms. Gill Ratcliffe will name the gallery to contain the First World War exhibition The Royal Newfoundland Regiment Gallery. Today’s gift brings her total contribution to $3.25 million. More

Newfoundland and Labrador students will have the opportunity to “walk” across Canada’s Arctic and challenge their perceptions of the North. This new educational project produced by Canadian Geographic Education and the Canadian Museum of Nature and sponsored by Subsea 7 will be on display at The Rooms this coming weekend. The Arctic Alive: Explore the natural history of Canada’s Arctic program includes a giant floor map, measuring eight metres x 11 metres, that can be easily rolled out in gyms or large rooms. The map is part of a portable learning kit that will be available to schools across Newfoundland and Labrador starting in September 2015. More

Memorial University and The Rooms are celebrating the single largest bequest to the university’s School of Music and an extraordinary donation of fine art to this province with a series of special events. On Friday, February 27, a special Faculty Gala Concert at the D.F. Cook Recital Hall will pay tribute to the late Edwin Procunier, a Newfoundlander and Labradorian and long-time supporter of the arts who passed away in 2011 at the age of 83. More

Newly Discovered Fossil on Display at The Rooms

An internationally significant fossil, discovered recently on the Bonavista Peninsula, Newfoundland and Labrador, is now being housed at The Rooms for conservation, safe keeping, future research and public viewing. Haootia Quadriformis, believed to be the earliest evidence of muscular tissue found on record, dates back 560 million years and impacts the current understanding of the origin of animals. More

The Rooms Corporation has appointed a new Director/Chief Curator of the Provincial Art Gallery. Vicky Chainey Gagnon will assume the position at The Rooms on July 1 of this year. “The Rooms is embarking on its 10th year of operation, and we are tremendously proud of our accomplishments to date," said Dean Brinton, CEO, The Rooms Corporation. "Ms. Chainey Gagnon’s appointment signals an evolution in the art gallery division, moving towards a truly interdisciplinary approach to engage the public in dynamic new ways.” More