The Geological Survey of Newfoundland

The Geological Survey of Newfoundland

The establishment of geological surveys was an integral part of the industrial development of the early nineteenth century. In Britain, the United States and Canada, state or provincial geological surveys were formed with the express purpose of uncovering new sources of mineral wealth, particularly iron and coal. These two minerals were the corner stones of the industrial revolution, and abundant sources were required to keep the factories of Britain and the United States in full production. 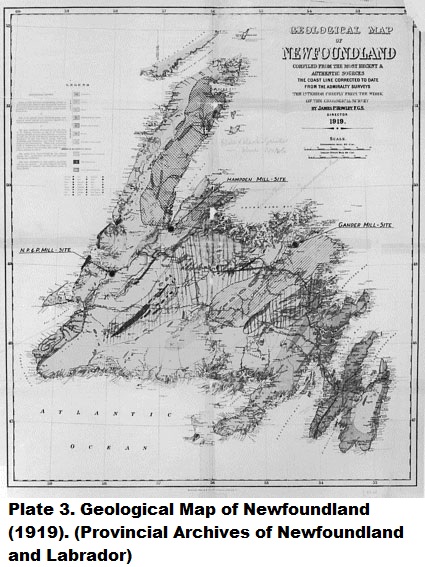 Responding to this desire for greater knowledge of the mineral and economic potential of the island, the Government of Newfoundland hired Joseph B. Jukes, a young geologist from England, to prepare a report on the geological structure of Newfoundland and the economic value of his discoveries. Jukes spent 1839 and 1840 studying the geology of the island and circulated a published report and geological map of his findings. Unfortunately, lack of government funding brought his work to a halt and because of its generalized nature, his report did little to encourage the development of the island's mineral resources. It was not until twenty-four years later that geological exploration was again resumed in Newfoundland.

Meanwhile, in 1842, the Geological Survey of Canada, or GSC, was established under the directorship of Sir William Logan. This government agency became responsible for exploring, mapping and recording the resource potential of what was then Canada - present day Ontario and Quebec. The GSC was run as a scientific establishment with people hired as chemists to analyze the mineral content of rocks, paleontologists to study the fossil record contained in the rock formations, geologists to explore, study and interpret the geological record, and draughtsmen to produce the geological maps.

Sir William Logan's assistant from 1842 to 1864 was Alexander Murray (1810-1884), a former Royal Navy lieutenant who had settled in Upper Canada. In 1864, at the invitation of the Newfoundland Government, Murray assumed the directorship of the Geological Survey of Newfoundland, and remained as director until his retirement in 1883. In 1867, James Patrick Howley (1847-1918) of St. John's, was appointed as Murray's assistant. As a direct result of the explorations and surveying of the interior, these two men set the stage for the industrial development of Newfoundland. The agricultural and mineral potential that Jukes had hinted at earlier was now clearly and precisely documented for future realization. Upon Murray's retirement, Howley was appointed geological and topographical surveyor. Four years later, in 1887, he assumed the additional responsibilities of curator at the Newfoundland Museum. Howley held both positions until his death in 1918, and today is particularly remembered for his historical account, The Beothucks or Red Indians, published in 1915.

Starting as soon as he arrived in Newfoundland in May, 1864, Murray undertook an ambitious programme of geological exploration. The Geological Survey was usually provided with a small schooner to move Murray, his party and equipment to various coastal locations. The field season started in the late spring and usually ended in November, when Murray would return to St. John's to draw his maps, write his reports and ship his specimens to the Geological Survey of Canada for analysis. The 1864 field season saw Murray examine the eastern coast of the Great Northern Peninsula, and portions of Hall's Bay, Notre Dame Bay and White Bay. 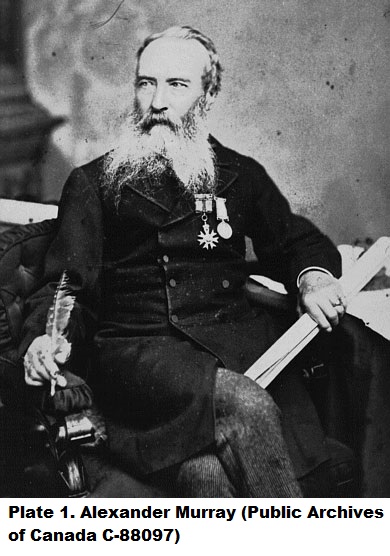 In 1865, Murray began to explore the interior of the island, an area as yet not accurately mapped. This meant that he was forced to spend time producing topographical maps before he could proceed to producing detailed geological maps. It was during all this surveying, based on the principle of triangulation, that Murray noticed discrepancies in both the latitude and longitude of the coastal or hydrographic charts being produced by the British Admiralty. Using a chronometer, a device for measuring time, Murray corrected these errors on his maps, especially those dealing with the coastal areas of St. George's Bay and the Humber Arm. An example of this type of work is his Map Showing the Distribution of the Silurian and Carboniferous Formations in St. George's Bay and Geological Explorations in the Years 1865 and 1866. This map was based on detailed topographical surveys conducted by Murray in 1865 and 1866 on the west coast. The immediate result of this survey work was to observe the tremendous agricultural potential of the Codroy River Valley. By correcting the latitude and longitude bearings of the hydrographic charts, Murray guaranteed that future government surveys and the granting of land to settlers could be very precisely related to the new maps of the area. Geologically, the surveys showed the boundaries of the coal formations, the presence of lead on the Port-au-Port Peninsula and gypsum at St. George's.

It is with Howley's appointment in 1867 that Murray finally had a keen assistant, and together, they took annual expeditions to various parts of the island. Murray and Howley gained their detailed knowledge of the interior from Micmac guides as they explored and mapped Newfoundland's hitherto unknown areas. The Newfoundland Micmac, primarily settled in Conne River, Fortune Bay and in Bay St. George, maintained traditional trapping and subsistence hunting patterns in the interior throughout the nineteenth century. Using the various water systems, they developed a series of inland canoe routes that extended from the south coast to the west coast and up to Notre Dame Bay. Their contribution to the mapping of the island's interior is demonstrated by the number of Micmac place names, such as Meelpaeg Lake, Keagudeck Lake, Mount Sylvester and the Annieopsquotch Mountains, still found on Newfoundland maps.

Because of his acquired knowledge of the Newfoundland interior, Murray was approached in 1875 by his old friend Sir Sandford Fleming, the builder of the Canadian Pacific Railway, to provide him with information about the best railway route across Newfoundland. The Newfoundland Government was interested in the possibility of a railway from St. John's to the west coast and approached Fleming to undertake the survey. Murray, as asked, submitted all his reports and maps to Fleming and suggested the most suitable trans-island route, which Fleming's three survey parties roughly followed.

While both Murray and Howley published numerous annual reports, papers and books, their most important contribution to the growing knowledge of Newfoundland was in the area of geological mapping. Their surveys revealed not only the geological structure of the island, but also the inland water systems, the mineral potential, the vast timber reserves and the possibility for agricultural development. Starting in 1873 and continuing over the next forty- six years, Murray and Howley published a variety of geological maps. In 1873, Murray published his Geological Map of Newfoundland which used different colours to indicate different geological formations. In the same year, he also published his Map Shewing the Distributions of the Coal Formation etc. St. George's Bay Newfoundland". His last map Newfoundland, a large wall map using different colours to show various heights of land, was published in 1879.

n 1881, as the result of his surveys on the Avalon Peninsula, Howley published two maps: a geological map of the Avalon Peninsula called Peninsula of Avalon Showing Distribution Formations and Section Map Showing the Corrugations Effecting the Stratification of the Huronian Formation Near Brigus, Conception Bay. This Brigus map was in response to a supposed gold strike in the Brigus area. In 1891, Howley published a large wall map entitled Newfoundland. In 1901 he used this as a base map for colouring in the geological structure of the island and in 1907 published it as Geological Map of Newfoundland". In 1919, one year after Howley's death, this map was republished in two smaller sizes and its accuracy serves as a testament to their untiring efforts in the exploration of Newfoundland. 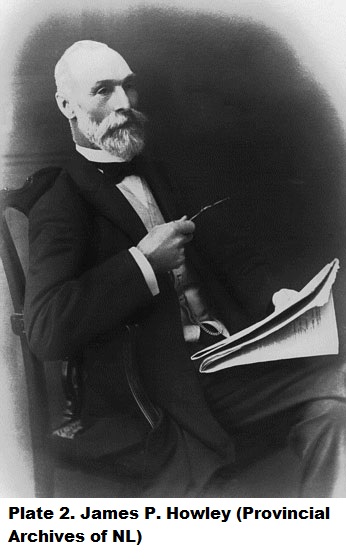 Geological reports and surveying are achievements for which Howley and Murray are immediately recognized. Less known, but of equal importance to the intellectual development of Newfoundland, was their involvement in the establishment of a museum. Geological Surveys traditionally operated small geological museums in which specimens were displayed for public viewing. For the Paris Exhibition of 1867, Murray arranged a collection of economic minerals which were designed to inform and attract potential investors to Newfoundland. By the early 1870's Murray was operating a small geological museum of minerals and fossils in several rooms of his home. In 1887, the museum was provided with space in the new Post Office Building (Water and Queen St.) in St. John's, and Howley was appointed curator of the museum in addition to his other responsibilities. Under Howley's direction the scope of the museum expanded from primarily that of minerals and fossils to include artifacts from the native people of Newfoundland and Labrador including the extinct Beothuk Indians. He also included 367 plant specimens, animal specimens and a wide range of local and international artifacts.

Howley was involved in preparing the revised Newfoundland display for the 1911 Festival of Empire Exhibition held at the Crystal Palace in London, England. The exhibit which was awarded the Diploma for Grand Prix, included agriculture, forestry, fisheries, manufacturers and natural history exhibits. The collections that Murray and Howley assembled as part of their work with the Geological Survey form, in part, the basis of the present Newfoundland Museum collection, thereby creating a 120 year history of museum tradition in Newfoundland and Labrador.

GEOLOGICAL SURVEY - Usually established by governments for the purpose of exploring and mapping the land.

TOPOGRAPHICAL MAP - A relief map which shows the natural and man- made features of a geographical area.

TRIANGULATION - The system of tracing and measuring a series or network of triangles from fixed points, in order to survey and map a region.

LATITUDE - Locations north or south on the earth's surface measured in degrees, minutes and seconds.

LONGITUDE - Distances east or west on the earth's surface measured in degrees, minutes and seconds.

CHRONOMETER - An instrument used for measuring time and used for determining longitude.