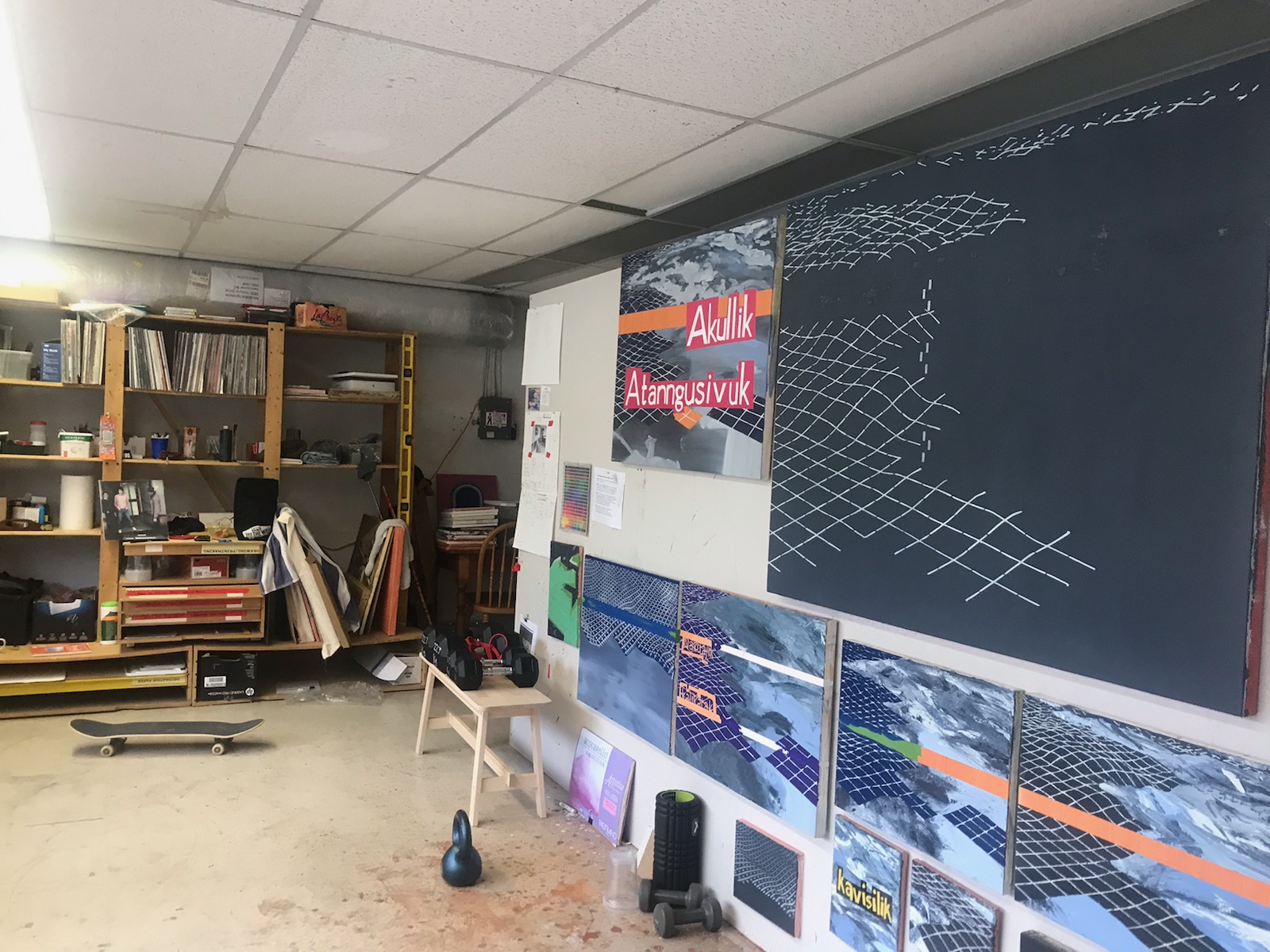 In our sixth installment of In Practice, Mireille Eagan (Curator of Contemporary Art) speaks with painter Mark Igloliorte about creating art during a pandemic. A professor at Emily Carr University in Vancouver, Igloliorte was born in Labrador and raised on the west coast of Newfoundland. His work is currently on view as part of “Of Myths and Mountains” which re-opens to the public on June 29th.  His exhibition “Traverse” that was scheduled for this summer at the Labrador Interpretation Centre has been rescheduled to next summer due to travel restrictions.

ME: How are you holding up, Mark? How has the pandemic affected your art practice?

MI: Frankly, it has given me time to focus on myself and on my art. I started training with a gym about a year ago. Since quarantine, I have started using my studio space to train. Having an open schedule has allowed me to stay pretty consistent training 6 days a week. Whenever I can I also jump in the ocean for a swim. For me, it started with training for skateboarding and has expanded to wellness in mental health and physical health. In part, this started from seeing on social media how professional skateboarders have been sharing their training programs.

ME: I like that you talk about physical activity almost immediately. I’ve noticed how disembodied this time is – not only in terms of physical distancing but in terms of how we connect, such as with video conferencing. A return to physical activity seems to be common. But I’ve also noticed, with you, that the process of learning is a key part of your practice -- whether learning to kayak or skateboard – as a way to acquire knowledge through the body. Can you speak more about that, please?

MI: Yes, exactly. One of my strongly held beliefs is that anyone can learn anything. It isn’t necessarily about talent. Trying is the way to make it flow. If you start working sincerely, even if you run into walls, you’ll find another way. With doing something you’ve never done before, you can’t overthink it because it’s going to change. I’m letting myself not worry about learning.

"I value learning as a way to move intentionally. "

One of the things that I’ve realized about an artistic practice that is valuable for everyone is that an artist is the first person in an audience. So, to think about making something interesting to yourself is a generous way to relate to an audience.

In the studio, I have been working away at a series of paintings that has literally taken me years to finish. There are about twelve of these paintings that I am working on. It’s such a big series, so if I lose interest I’d be worried that my audience wouldn’t be interested either. In part, it’s taking a while it’s because I’m working in oil. I have to wait for the oil to dry before I can paint the next aspect.

In another way, it’s because, while I’m working very slowly, I have to make a decision about what step comes next. It gets a little more complicated than going from beginning to end, so it makes it a meditative practice where I’m taking the time to think long term about how I want this painting to be interesting to me over this amount of time.

ME: Which series is this?

MI: The series is the one that is currently on display at The Rooms, where I combine satellite imagery and Inuktitut words. The satellite imagery is of Nunatsiavut, from a visit to Hopedale, where my father is from. I was using my iPad to study the landscape for different outings that I had.

One of the things I always loved about being in Hopedale was hunting or collecting berries. When you’re with people so much Inuktitut comes out while you’re on the land. My theory is that settled communities are a colonial way of thinking. So there are colonial labels for everything in the community but that isn’t true for everything on the land. The language is much more comfortable on the land. I really appreciate people sharing that knowledge with me, learning from them.