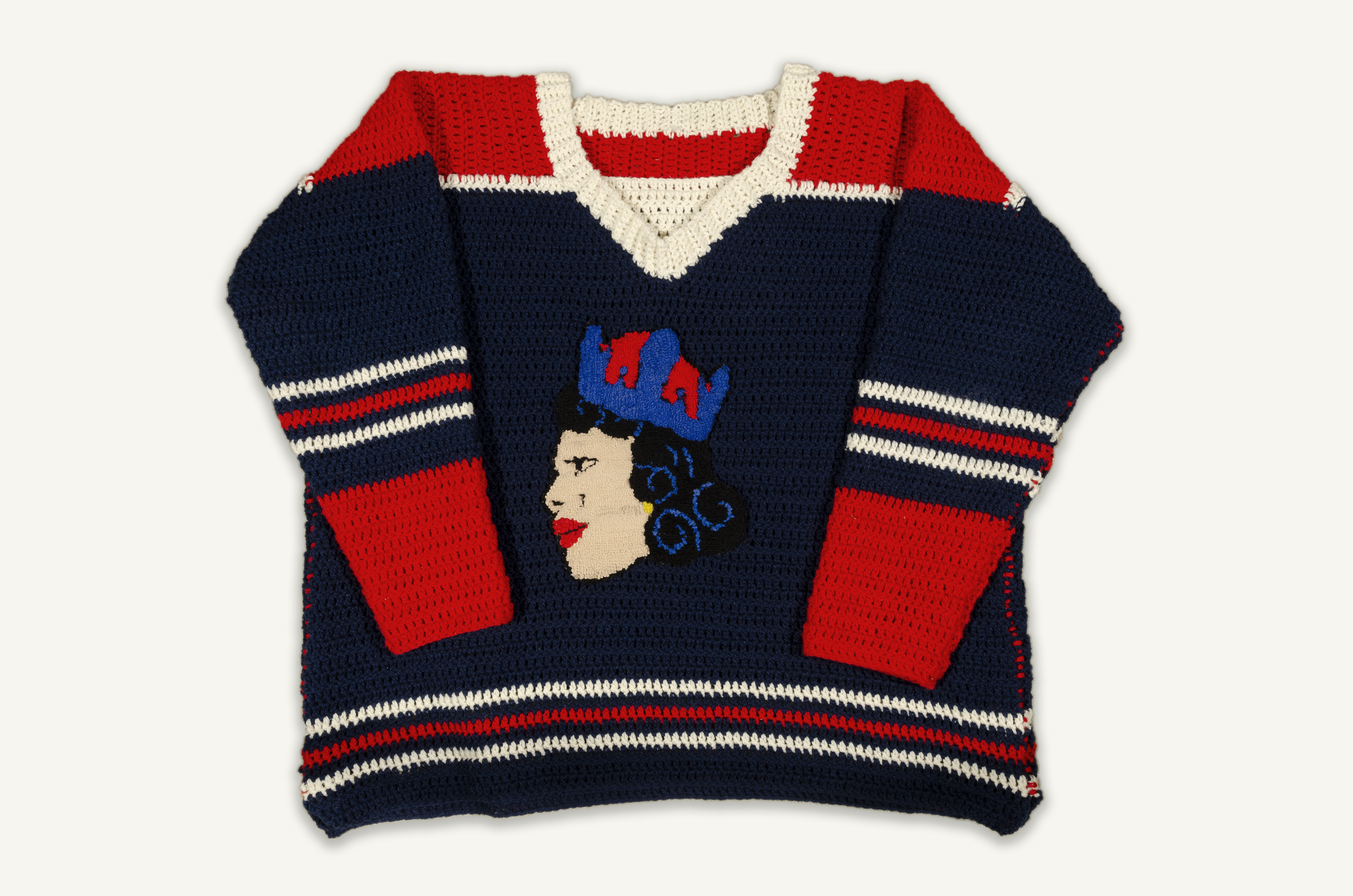 In the seventh installment of In Practice, Mireille Eagan (Curator of Contemporary Art) spoke with Corner Brook artist Lucas Morneau about how their art practice has been affected by the pandemic. Many know Morneau through their work as The Queer Mummer, a drag identity that explores the queer history of mummering in this province.

ME: What are you working on now?

LM: I have invented what I call “The Queer Newfoundland Hockey League” (QHNL) a fictional hockey league that consists of, now, 14 teams. The series was inspired by the comments made by Don Cherry on Coaches’ Corner, which were coded homophobic slurs like calling players “sissies” or “pansies.” It was promoting a toxic masculine version of hockey versus a sport where you can have fun with it and be yourself on the ice. I want to view hockey as inclusive. I am a strong believer in moving away from the violent aspect of hockey and toward an all-gender league where anyone can play depending on their skill level.

The series combines towns from this province with team names that are reclaiming pejoratives, because team names are normally based on things that are scary or tough. The team names include the Nain Nancies, St. John’s Sissies, The Ferryland Fairies, The Bonavista Buggers, The Cox’s Cove Queeros, The Port Union Pinkos, Pasadena Pansies, Dildo Dykes, Come By Chance Flamers, Francois Fruits, Fogo Island Fag Hags, Twillingate Twinks, Corner Brook Queens, and the Leading Tickles Lesbos. I may add to it, because I did not name a team after the place of Baytona, which I would obviously change to Gayside again.

ME: How do you choose the names?

LM: I work with iconography associated with those towns. The first team was the Corner Brook Queens, based off the Corner Brook Royals. For me, hockey has had an effect in my family history. My uncle George Faulkner played with the Royals and is in the Newfoundland Hockey Hall of Fame.  I copied the jersey colours and patterns and reused the crown in the logo as the crown on the head. Another one is the Come By Chance Flamers, based on the refinery and the big flame on the tower there.

I will also be creating hockey cards for each team, and old-style goalie masks made of crocheted doilies.

ME: Why the older style mask?

LM: The first goalie to wear a mask was Jacques Plante. When he did, many people questioned his masculinity. He had just gotten a puck in the face the period before. He had a messed up face and wanted to continue playing, so went on the ice with this mask and they made fun of him for it. It is very toxic because you are saying that you have to put your whole body at risk constantly. So, that is why I wanted to use this gender-coded fiber practice — its association with the domestic and matriarchal spaces.

My practice is thinking about what happened in the past in terms of queer activism. It is a conversation that is happening now about systemic problems like homophobia, transphobia, and sexism that are based on hierarchies. I want to explore the idea of generational narratives rather than history.

ME: What do you mean by generational narratives?

LM: The term generational narratives speaks about those stories and narratives as lived experiences from generation to generation.  These histories are not being taught in school. What is being taught is very Eurocentric, white, and male. And therefore, I have this interest to go back and look at what was happening and recontextualize it.

ME: How does your work with the queer hockey league tie to your persona as the Queer Mummer?

The Queer Mummer was the catalyst for using camp humour to talk about serious issues. Camp humour alleviates critique because it is exaggerated while pointing to important concerns. Camp is quintessential with every series of work I make.

Historically mummering comes from Ireland and England as a folk theater, the crossdressing that happens within mummering exists because of drag and its use in theatre. So, it was important for me to try to connect the dots for people to show how, really, the difference is that drag might have a target of homophobia on it, but that essentially that mummering is considered heteronormative because it is a tradition.

Stepping outside The Queer Mummer is always good though, because I can explore the same issues in other ways.

For me, making is very therapeutic too, so I find that, especially if I’m really stressed, I will hunker down and make. I had started thinking about making the series in February.  I received a grant from ArtsNL, thankfully, so my art practice has been flourishing because of it. I am also moving to Sackville, NB, in a few months to be Production Manager at Struts Artist Run Centre. So, this series needed to be done. I see it continuing to grow, however – maybe even becoming a national league.