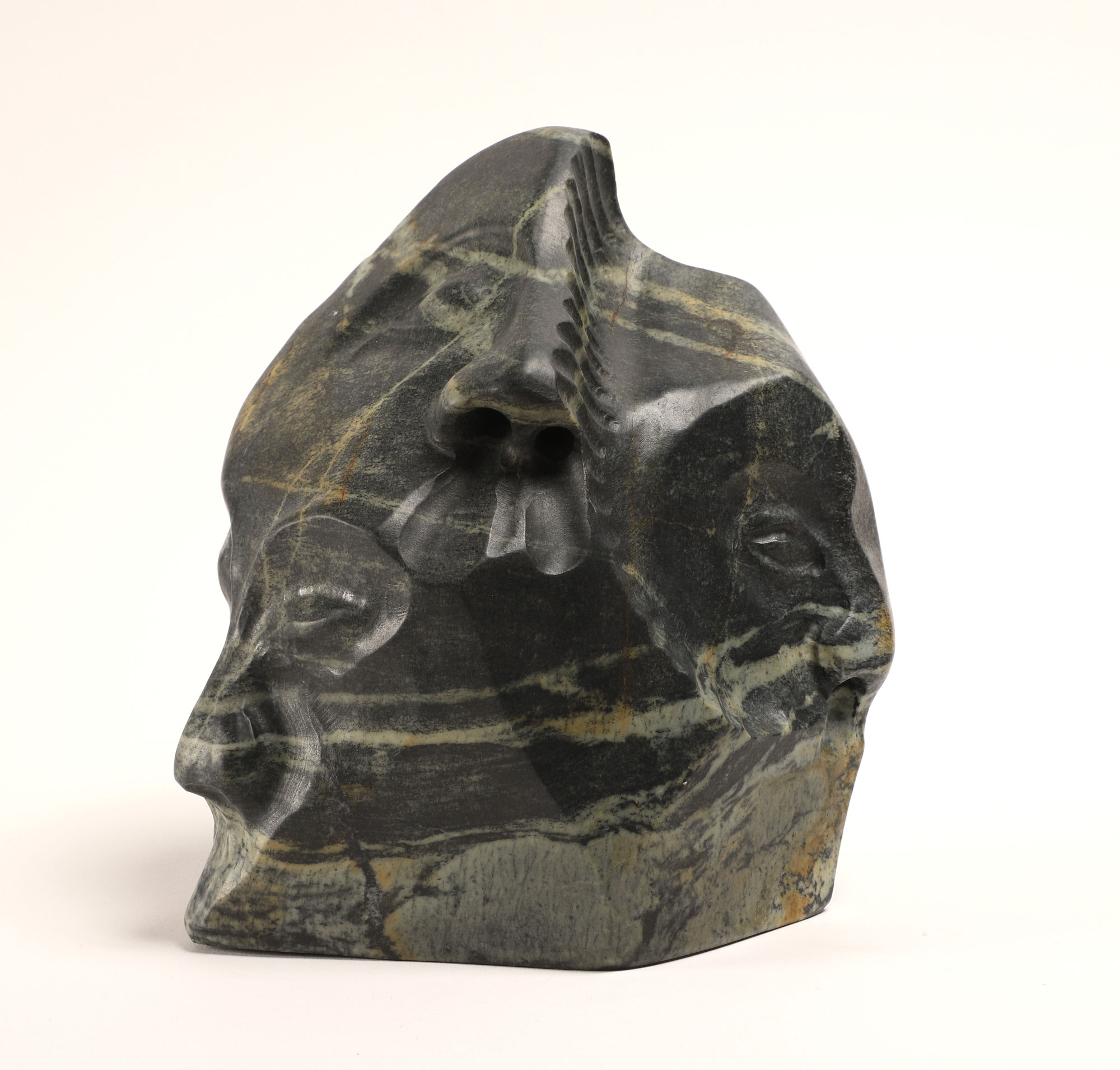 We are all ‘A Part of It’:
A Conversation with Gilbert Hay

On a sunny September afternoon, our Curator of Canadian Art, Darryn Doull, sat down for a phone call with sculptor and printmaker, Gilbert Hay. Based in Nain, Nunatsiavut, NL, Hay is not only a prodigious maker but also a respected arts advocate with a formidable standing in the provincial arts community. Part of his reputation was earned as a spokesperson for the Labrador Inuit Association, liaising with federal and provincial governments to support the art and people of Labrador while processing land claims in bilingual exchanges. His artistic creations include carving, jewelry, sewing and printmaking. Hay’s work Elangugaluak (A Part of It), from 1994, was the first work visitors to the exhibition Of Myths and Mountains encountered.

“When I began to organize the exhibition Of Myths and Mountains, one of the very first works that I knew would be included was this sculpture by Gilbert Hay. Like many of his works, there was something enigmatic, gravitational and compelling in the form and in the way Hay had worked the material. I saw some obvious initial cues and nods but could never fully unpack the work. Even today, it pulls me back to look again, and again. It was a great honour to speak with Gilbert and to have this opportunity to share an excerpt of that conversation here.”
- Darryn Doull, Curator

The following conversation has been condensed and edited. A companion article from this discussion is currently included in the Winter 2020 issue of Inuit Art Quarterly (33.4).

Darryn Doull: Can you tell me a little bit about how and why you started to carve? What compels you to make art?

Gilbert Hay: When I originally started, my younger brother was already doing miniature carvings here in Nain… I was more into jewelry and this grew into prints as well. Eventually, I was able to master what I was doing in stone so well that it became an item that was able to sell and that was interesting to be doing.

I was interested in having children and there had to be a way of putting up the dollars necessary to try to raise some children, so that’s where it became something more of a way to help me. Second, it also helped me with trapping later because if I could do one piece in 3 or 4 hours in the evening, then it would be able to sell... well at that time it was a couple of bucks, 2 or 3 dollars… even that was help as far as wanting to raise children. I always had a knack of trying to do something with your hands and hopefully interpret for other people the things that sometimes go through your mind.

DD: How does a lived experience of the land inform your work?

GH: I was out there and experienced everything that I was working with so that it wasn’t just a memory stone. When people talk about memory stones, they talk about things from a hundred years ago or more. You’re not talking about what is happening today. I know what it feels like to be in the water, I know what it feels like to paddle storms. At the same time, these were pieces that I was trying to create that would be easily understood by people who were trying to look at my works and make them feel like it was a satisfying piece. I was quite independent as a hunter. I was out on the land a lot, but at the same time, I was interested in trying to translate my experiences into a form that would be able to introduce the art as I see it.

DD: Can you share a little bit about how you start a new work? Do you have an idea of what you intend to carve before starting?

GH: It didn’t make any difference because there was a lot of art being produced in Canada and a lot of Inuit art. I have seen them and travelled all over the North of Canada and central Canada, from one end to the other end. [It was] finding qualities of other artists from outside of your own culture that would give you tips about how you might be able to work certain ideas, of technical parts about cutting certain types of stone, and what type of equipment you might have to have.

So, basically, I was becoming an extremely technical artist of working with very hard stone. If I could get it, the piece would be able to hold its own without I or anyone else saying too much about it because there is a part of it [that is] apparent when you are looking at it. It takes a lot of mind-bending on your part as the artist, to try to understand what is going on.

“Oh no, here comes my angle,” and then I lost it. And all of a sudden a new angle presents itself. Each story gives you a different perspective of what is going on with that piece that you are doing. And if you are successful, you can use these actions to make the most beautiful piece of work to come out of that perception of your eyes and the mental translation of what you were trying to say in the first place.

DD: The surfaces of your works have an incredible depth and variety. In some areas, the raw stone comes through more and other areas are highly polished. Each guide a different reading of the work. How do you manage to balance these interests with the imagery you produce?

GH: All with the time and energy! When I first started and was just being introduced to everything, I was doing stuff off the top of my head and from my imagination. My stones, first, were too hard for a lot of other artists to use. Second, the finish produced a stone that was so beautiful… I spent a long time [working] at it, trying to figure out the best way.

What it seems, sometimes might not be what you are looking for. It might be a fantasy. It might be their imagination of what was or is. But here I was trying to create work that would be able to help us, for a personal value, that was being held in other people’s perspective. It was subtle, really subtle, and hard to predict. It’s so subtle that if you don’t look at this stuff carefully, you’re going to miss it.

DD: I really appreciate the chance to get close to your work. It always draws me back for more. What do you think of that magical energy in the stones that you select?

GH: At first, I tried serpentine. I didn’t find the stone very comforting. I knew exactly what I was looking for and the kind of density that was needed to hold a shape of what you were trying to make. And the colours in my opinion were not very appealing to a potential customer. A lot of the work was from a stone called speckled Labradorite.

The Inuit believes that at one time the Earth was touched by the stars, you know. It has. Other places that had the same experience of Labrador, which was being visited by meteorites from one time or another in the past [have similar stone formations]. I know it sounds like a fantasy idea… but at the same time it is the truth. When the stones were formed, the amount of heat produced this stone with different colours in it. One of the strongest colours is a blue that looks like a blue sky on a clear beautiful day.

A lot of the time it was just an inspiration to pick up the stone.

Thank you for sharing with us, Gilbert!