Strange and Beautiful: New Exhibitions at The Rooms Art Gallery 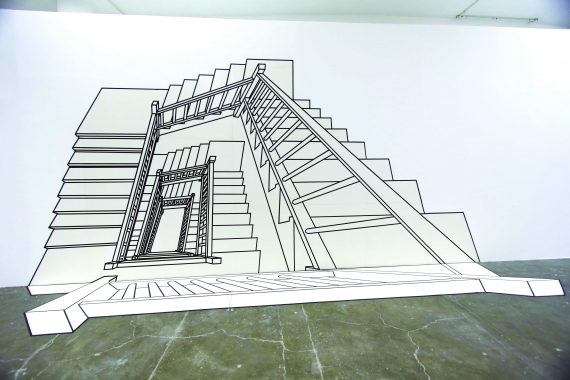 It is the middle of winter in Newfoundland and Labrador. The snow is piled high and the light is faint on the hills and cliff sides of St. John’s. For the last several months at the art gallery, our team of curators, managers, technicians, designers, guest writers, marketing and education staff have been working diligently on a new suite of exhibitions and publications. Very exciting times! Our offer to you this winter season: an array of projects where contemporary art meets dream space and intuitional logic; where architecture and the domestic riff along somewhat divided lines; and where everyday moments and processes of memory find new articulations and forms.

The eleven presenting artists are from Newfoundland and Labrador, and abroad: Kym Greeley, Marlene MacCallum, Kailey Bryan, April White, Olivia Boudreau, Regina Silveira, Sheila Pye, Tamara Henderson, Julia Feyrer, Maya Beaudry and Tiziana La Melia. The shapes created by these artists in their work operate in discrete terms, whether as sculpture, painting, installation, film or poetry; however, when brought together into exhibition contexts, the thirty or so artworks made between 1994 & 2016 make up an eclectic, and rather surreal whole. These ideas of ‘strangeness’ and the ‘everyday’ are crosshatched throughout the galleries in ways we hope will generate enthusiasm and appreciation for the uniqueness of today’s visual arts.

In enter the fog, co-curated by Mireille Eagan and Josée Drouin-Brisebois, the familiar is imbued with a strange language, which in turn, creates a certain open-ended reading of the artworks. What am I looking at, you might ask? What does this twist of the unfamiliar mean when it is woven into the conventions of the everyday? To ‘enter the fog’ is to probe a certain liminal zone where clarity is somehow inhibited, but the works on view remind us that it is also a space where new forms can be revealed and honed. Together the sequence of works by Tamara Henderson, Julia Feyrer, Maya Beaudry and Tiziana La Melia are an invitation to explore the contemporary arts as a distinct mode for understanding different emotional and perceptual states.

In All Day Within The Dreamy House, a selection of twenty artworks focuses closely on domestic architectural spaces. The exhibition is set against Alfred, Lord Tennyson’s dark poem Mariana about a young woman who has been abandoned by her lover. Suffering from isolation in a dilapidated farmhouse, Mariana’s despair is echoed in every creak of the building’s architecture. Photogravures by Marlene MacCallum, installations by Olivia Boudreau and Regina Silveira, a film by Sheila Pye, and paintings by Kym Greeley punctuate the gallery space, carving out original architectures and new conceptions of ‘home’.

April White’s installation A Day In The Life Of generates a slowness of perception. Tightly focused on ‘ordinary’ subject matter (getting dressed, eating breakfast, waiting for the bus…), White manages to elevate the day-to-day experience into unexpected beauty through a dozen watercolours, stop-motion animations, and text-based works. Kailey Bryan’s Nervous Whether is a giant, woven hive-like sculpture that visitors are invited to enter. Produced in the context of a three-month residency, the massive structure that took several hundred hours to produce is literally a material trace of the artist’s labour. The ritual of repetitive action is heightened in Nervous Whether and takes on anxious tones, showing an intricate web of meaning.

Why not stretch your imagination through art this winter season? We hope to see you in the galleries!