The committee was formed to carry out the functions of raising, equipping, transporting, and caring for the land contingent dispatched from Newfoundland and Labrador to fight in the King's service in Europe. It was also responsible for enlisting and equipping men for home defence. now faced the challenge of achieving its goal. On August 22, 1914, an Enlistment Proclamation ran in the papers. Men between nineteen and thirty-five were urged to enlist to "serve abroad for the duration of the war, but not exceeding one year." The rate of pay for a private was $1.00 per day plus free rations.

The first night the recruitment centre was open in St. John's, 74 men enlisted. Within a week, this number had reached 275. By September 2, the number of volunteers had reached 743 (although not all of these would meet all the enlistment requirements).

Most of the initial recruits were from St. John's. One of the key reasons was the existence of a number of church youth groups. The Church Lads' Brigade (CLB) of the Church of England was the first to be formed in the city in 1892. The Catholic Cadet Corps (CCC) followed in 1896, the Methodist Guards in 1900, and finally the Newfoundland Highlanders (Presbyterian) in 1907. Accompanied by their respective bands, these groups were instructed in drilling and became familiar with military-style discipline. Over time more men from other areas of Newfoundland and Labrador began to join up as recruitment efforts spread. Many young men lied about their age so that they could enlist. (This later included Thomas Ricketts from Middle Arm, White Bay, who was only 15 when he enlisted. Ricketts would become the youngest soldier to be awarded the Victoria Cross for gallantry in the face of the enemy.) 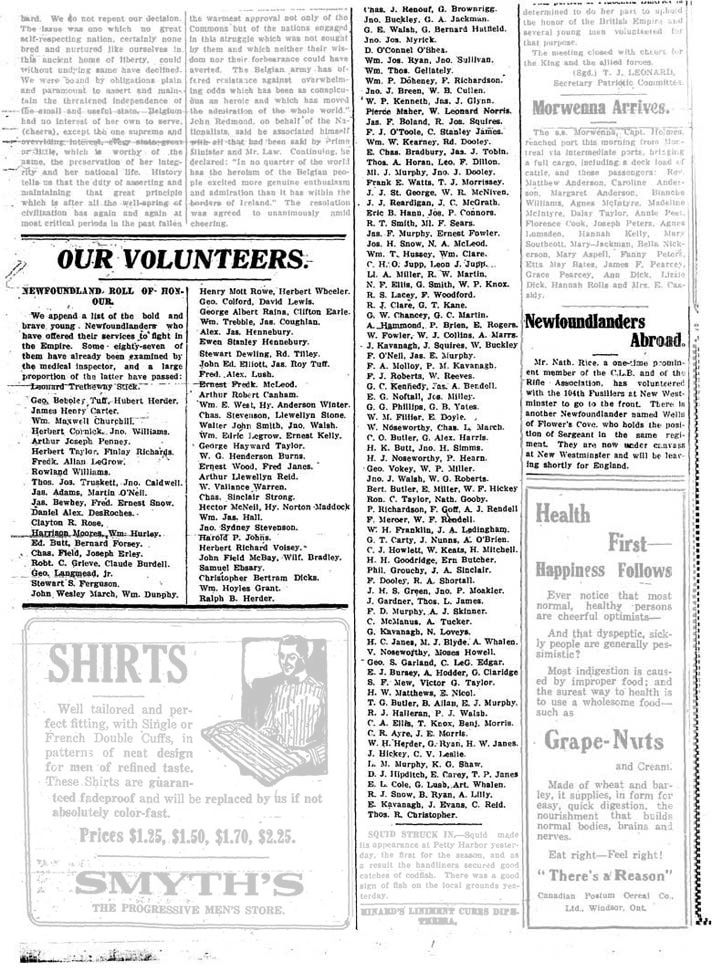 The Patriotic Association now began the task of equipping and training these men. By September 2, a training camp had been set up in Pleasantville in St. John's. Government, businesses, and private citizens donated tents. Other shelters for the men were made from sails taken from vessels in the harbour.

After a month of training, the First Five Hundred (actually 537 soldiers), also known as the Blue Puttees

Originally the Patriotic Association planned to provide soldiers with British "Service Dress" uniforms. But it was soon determined that it was "impossible" to obtain the requisite khaki material to make them.

Instead an alternative uniform was chosen, based on a uniform worn by Brabant's Horse, a cavalry unit that fought in the Boer War. This uniform was khaki with blue puttees. Thus, the first group of soldiers became known as the "Blue Puttees". Their blue leggings were seen as a badge of distinction. When the Newfoundland and Labrador troops arrived in England, however, they were issued regular khaki leggings which matched what the British soldiers were wearing., were ready to head overseas. On October 3, 1914, they marched from their training camp to board the SS Florizel, a steamer and sealing vessel that had been converted into a troopship. They were cheered on by a large gathering of citizens. The next day, the troops began their journey overseas. 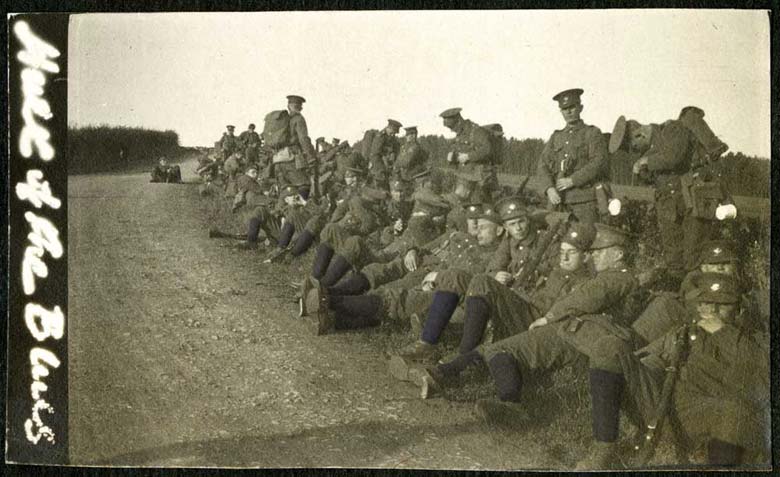 The Blue Puttees
Note: This image was taken in 1917 when all soldiers were wearing khaki puttees. This image has been colourized to illustrate blue puttees.