Why We Remember Them At The Rooms 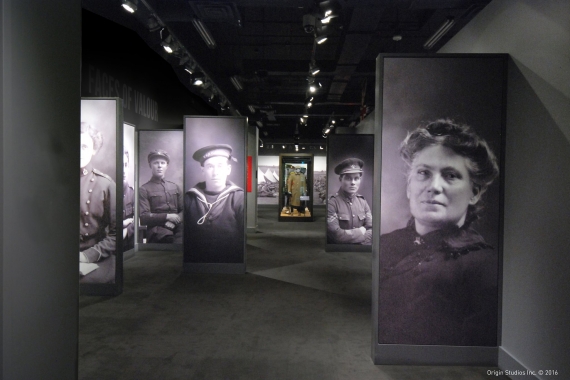 On July 1, of this year, The Rooms opened a new permanent 5,600 square foot exhibition, Beaumont-Hamel and The Trail of the Caribou: Newfoundlanders and Labradorians at War and at Home, 1914-1949.  This exhibition documents the impact the First World War had on the people of Newfoundland and Labrador both overseas and at home through the stories, photographs and mementos of the people who lived it.

This exhibition was the result of a three-year interdisciplinary project that had community engagement and consultation at its very core.  In fact, the decision to undertake this exhibition project was based on a community consultation project we undertook in 2011 to assist us in planning future exhibitions that would be of interest to our audience. In that year we surveyed residents across the province and asked them to identify what were the most iconic events, people, industries and cultural traditions that helped to shape our identity as Newfoundlanders and Labradorians. Under the events category, the topic that rose to the top was the First World War, and in particular, the attack at Beaumont-Hamel. I think it is important to note that this was in 2011, long before the movement to mark its 100th Anniversary really began.

Armed with this information we put this topic high on our list of future exhibitions to cover in our galleries and we set out to raise funds to mark the centenary of Beaumont-Hamel. From our own research at The Rooms, we knew that our visitors are most interested in personal connections with the past more so than detailed historical facts and figures.

In the spring of 2014 a team of 7 to 9 rotating museum and archives staff set out on a 4-week ”Road Show” and visited 14 communities across the province to make connections with people and to gather those personal stories. We were overwhelmed with the response from the community both with donations of historic material and monetarily.  To date, over 9,000 people have participated in our research events and over 700 individual artifacts and archival documents have been donated to the Provincial collection while our fundraising campaign has hit close to the $12 million mark, making The Rooms initiative the largest First World War commemoration in the country.

Why were we so successful in raising such a significant amount of financial and historical resources donations for one very specific event in our long history? What is it about Beaumont-Hamel that resonated so strongly with so many people?

One hundred year milestone histories are especially significant with regards to the act of remembering. They represent a turning point in a community’s collective memory as people who experienced an actual event first, or even second hand, are no longer alive.

Leading up to the opening of the exhibition on July 1, there were a number of special events and activities that we presented that were marketed with the tagline “Remember Them at The Rooms”. But what, exactly, were we going to remember about the War at The Rooms given that:

Through a variety of community consultation opportunities we were able to develop a list of themes that Newfoundlanders and Labradorians told us needed to be included in the exhibition, in other words, what needed to be remembered about our involvement in the First World War: stories beyond Beaumont-Hamel, service and volunteers.

What were the post-war impacts on Newfoundland and Labrador up to 1949? Did the First World War lead us down the road to Confederation?

The question that guided our exhibition development process was - “What was the main message we wanted visitors to take away from a visit to the exhibition and how were we going to present content so as to meet the expectations of our visitors?”

The MAIN MESSAGE we developed was as follows:

The First World War was a defining event with lasting impacts on Newfoundlanders and Labradorians, at home and overseas.

We also developed a number of Sub Messages:

Newfoundlanders and Labradorians responded differently to being caught up in this global event – at the time and over time,

Newfoundlanders and Labradorians had different experiences of being involved in this world conflict at home and overseas. The approach we took in the exhibition was not your typical military museum installation of the telling of battle victories and defeat, but rather it is a journey through the war years told through the words, writings, personal memorabilia and photographs of Newfoundlanders and Labradorians who experienced the war first hand. The faces of many who served are prominently placed throughout the exhibition and are designed to reinforce to the visitor that these were real people - husbands, sons, fathers, brothers, sisters, daughters mothers, wives  - any one of us really. In this exhibition there is no way to avoid making eye contact with those who lived through the war years – for some an unnerving experience.

Since opening the exhibition, our visitation numbers have sky rocketed this past summer. In July and August alone we had over 30,000 visitors to the exhibition, more than tripling our usual summer attendance numbers.

The exhibition guest books are filled with so many moving comments from visitors, as families remember loved ones, guests from outside the province place their world view into a broader perspective and as Germans reflect on their country’s role in a world conflict that impacted a people so far away from the Western Front so long ago.

For visitors from Newfoundland and Labrador, the recurring theme expressed in the guest books is that of pride in our people and in our country, as we were at the time.  There is a real sense expressed that Newfoundland established a national identity on the battlefields of Gallipoli or France that was lost with the resulting economic and political turmoil that followed the end of the First World War.

Some might say that this sentiment is not unlike today’s political and economic uncertainty throughout the world. Studies have shown that in countries where there is ongoing  political and economic turmoil, people turn to museums looking for that sense of security and continuity - they are looking for confirmation that their community has faced difficult times before, and have overcome incredible challenges. They need proof that the country and its people will survive. This is why I think the recent bombings of significant museums and monuments in war-torn countries has been so devastating for the people and exactly why such activities have been undertaken.

The marking of the 100th Anniversary of Beaumont Hamel with the opening of the exhibition at The Rooms provides visitors with opportunities to reflect on how we as individuals, families, communities and nations have survived, changed and grown in the years since that tragic event, and how the experience continues to contribute to NL sense of identity.

In its early days then, the exhibition appears to be fostering a strong sense of pride in who we are as a people. This is why I believe we had such success with our call for artifacts and archival material as well as for financial assistance. When King and Country came calling 100 years ago we answered that call for assistance without fail and we did it again just 15 years ago when 9/11 brought the world to our doorstep, once again reaffirming our strong sense of service. Our response to these world events tells a great deal about our character as a people.

A goal of our First World War exhibition is to encourage dialogue among our visitors. We do not see it as our role to impose interpretations of the War. Rather, we want to provide a forum for discussion. Through the use of questions in the exhibition text, we ask visitors to form their own opinions on the long-held notions of “loss of leadership and nationhood” that may or may not have led down the path towards Confederation.

In marking the milestone anniversary of Beaumont-Hamel at The Rooms we wanted to do more to ensure that our efforts would have a long-lasting impact in our community. So often following the marking of a centenary, the event being commemorated and the act of remembrance loses public interest. That is why building a permanent exhibition was a key step towards keeping the story of the First World War alive. But we also needed to take a more active and ongoing role in educating the youth of our province about the impact of the War on our history and identity. To that end, this fall we are introducing a new school program based on the exhibition as well as launching a new travelling First World War education kit that will serve as an ongoing educational resource for educators across the Province.

Education projects such as these, along with the permanent exhibition, will ensure that our tag line, “Remember Them at The Rooms”, will be more than a one-time sentiment and that future generations will never forget.

Director of The Rooms Provincial Museum and Regional Operations