In Some Far Place 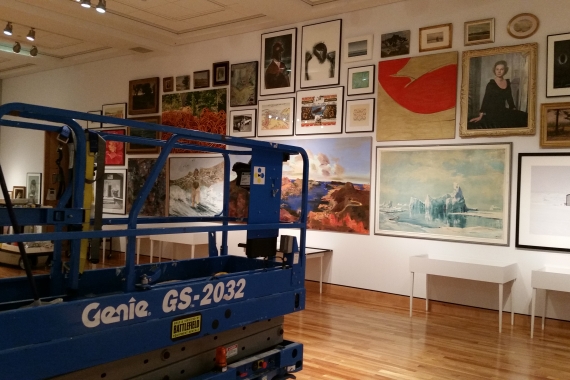 The most interesting stories often exist in the periphery, hidden to the side of history. Three years ago, a Curator with the Museum told me about a flamingo held in their collection. The flamingo was one of two that had arrived on the northern coast of Newfoundland in 1977, was shot immediately, taxidermied, and kept in their storage as an oddity.  I told her I would love to see it.

That strange, lost bird became the spark for an art exhibition called In Some Far Place, which is on at The Rooms now until April 23.  Pivoting on the story of this collection oddity, 11 contemporary artists are brought together to explore what is left out of official histories. In addition, a large salon hang sheds light on the hidden side of exhibiting and collecting practices.

This is not a normal salon hang.  It is composed entirely of permanent collection works that have never been exhibited in the history of The Rooms Collection. Approximately 75 works are on display, with the remainder accessible through a searchable database. Artists range from Gerald Squires, Christopher Pratt, Mary Pratt, David Blackwood, Jerry Evans, and Helen Parsons Shepherd, to nationally recognized artists such as the Group of Seven, Pegi Nicol MacLeod and John Hartman.

1300 of the 1600 works in The Rooms Collection have never been in public spaces. This is not unusual – at any one time, most galleries and museums only show 5% of their collection. The remainder is held for research, as a record of cultural history.

By shifting focus to objects hidden in the vault, it is my hope that visitors gain insight into the different side stories of larger cultural narratives, and consider how new stories can be revealed once attention alters.